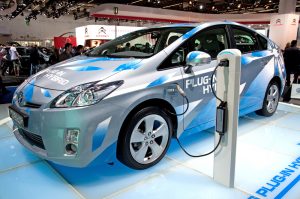 Electric Vehicle (EV) used as an alternative of energy conservation of oil. © BP63Vincent

Electric vehicles have several advantages for both owner and the environment, but one major disadvantage is the risk they pose to pedestrians. The fact is electric vehicles are much quieter than those powered by gasoline (internal combustion engine (ICE) vehicles) making them prone to pedestrian accidents.

But starting September 1, 2019, all electric vehicles are required to produce a sound while driving at speeds less than 18.6 miles per hour.

A long-awaited “Quiet Car” rule was announced today by the U.S. Department of Transportation’s National Highway Traffic Safety Administration (NHTSA) after years of scientific study by various researchers, including the NHTSA itself.

In 2008, a study funded by the National Federation of the Blind found that electric vehicles pose increased risk to “pedestrians who are blind, small children, the elderly, runners, cyclists, and others.”

In 2009, the NHTSA conducted its own study and that found hybrid electric vehicles or “HEVs have a higher incidence rate of pedestrian and bicyclist crashes than do ICE [internal combustion engine] vehicles in certain vehicle maneuvers. For example, HEVs were twice as likely to hit a pedestrian during “slowing or stopping, backing up, or entering or leaving a parking space.”

Even though the NHTSA estimates that 2,400 injuries will be avoided per year as a result of the rulemaking, other manufacturers still have three more years to add sound devices to their vehicles.

In the meantime, pedestrians should take precautions while walking, biking or running near roadways to prevent being hit by an electric car – always make yourself visible with bright or reflective materials, avoid listening to music or texting, and stay on the sidewalk.

If you or a loved has been injured due to a pedestrian accident by any kind of vehicle while on foot or bicycle, call the Pittsburgh car accident lawyers at Pribanic & Pribanic for a free consultation: 1-800-392-4529.