By Pribanic & Pribanic
Posted July 5, 2015
In Motor Vehicle Accident
Snow moving through Pennsylvania wreaks havoc on state’s highways2015-07-052015-07-05https://pribanic.com/wp-content/uploads/2019/03/pribanic_pribanic_attorneys_in_pittsburgh_logo-01.pngPribanic & Pribanic | Pittsburgh Injury Attorneyshttps://pribanic.com/wp-content/uploads/2019/03/pribanic_pribanic_attorneys_in_pittsburgh_logo-01.png200px200px
0
Although snow and colder temperatures can create a beautiful winter landscape in Allegheny County, this winter wonderland also leads to dangerous driving situations. According to the U.S. Department of Transportation Federal Highway Administration, the cause of 24 percent of all car accidents can be traced back to adverse weather conditions like snow, sleet and ice on the roads.

The dangers of winter driving

There are two main reasons why colder temperatures bring danger to Pennsylvania’s roads, ice and black ice. When temperatures drop below freezing and the roads are wet, ice forms quickly and is slow to melt because the ground warms more slowly than the air outside. This causes dangerous driving conditions even when it isn’t very cold outside.

Although Pennsylvania missed out on a white Christmas this year, a snow storm that swept through the eastern part of the state lead to crashes north and west of Philadelphia early in the morning following the holiday. According to philly.com, several crashes were reported on the Pennsylvania Turnpike, a multi-vehicle crash on Interstate 78 shut down several lanes of the highway and other crashes were reported on several of the state’s major highways including the U.S. Route 22 and U.S. Route 202.

A particularly dangerous accident in New Hanover between a car and a snowplow caused the car that hit the snowplow to flip over, says NBC Philadelphia. As a result of the accident, two people were taken to the hospital by airlift and another injured person was taken to receive medical attention by vehicle.

If you need to drive during winter weather conditions, there are several things that you can do to avoid serious accident such as these. When you drive:

Unfortunately, not all drivers know how to drive in the snow or even alter their driving techniques to complement adverse weather conditions. If you were injured in an accident caused by a driver operating their vehicle unsafely, contact an attorney that can help you receive proper compensation for your injuries. 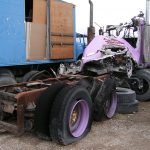